Telangana comes to standstill for mass recital of national anthem 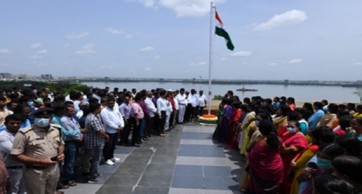 Hyderabad, Aug 16 (IANS) Telangana came to a standstill for a minute on Tuesday for mass recital of national anthem as part of the ongoing celebrations to mark 75 years of India's Independence.

As the clock struck 11.30 a.m., the traffic lights at junctions turned red as people joined the mass recital. Chief Minister K. Chandrasekhar Rao led the state by joining the mass recital at the statue of former Prime Minister Jawaharlal Nehru in Abids in the heart of the city.

Ministers, MPs, state legislators and other public representatives, political leaders and officials participated in the programme held across the state.

People at traffic junctions, markets, offices, educational institutions, malls and other public places across villages and towns participated in the programme.

The state government had appealed to people to honour the freedom fighters by standing up for the national anthem.

People gathered in gram panchayats, urban local bodies and other places for the mass recital.

Employees in the government offices and students in schools and colleges also joined the mass recital. Hyderabad Metro trains were also stopped for a minute for recital. The national anthem was also sung at the metro stations.

The programme was conducted as part of two-week long Swatantra Bharata Vajrotsavalu or golden jubilee celebrations of Independence organised by the state government.

At the main programme held at Abids, hundreds of people joined the chief minister and other ministers and officials in the recital.

Patriotic fervor gripped the entire area, students from educational institutions joined the chorus in the recital of the national anthem.. The venue was also reverberated with the slogan of "Bolo Swatantra Bharat Ki Jai". CM KCRA raised hand with folded fist and chanted the slogan. All the participants on the dais and students also rendered the national anthem.

Police had imposed traffic restrictions in Abids and surrounding busy areas in view of the main programme.

As part of the two-week-long celebrations, the state government had also distributed 1.2 crore national flags across the state through door-to-door distribution. The government also organised screening of Richard Attenborough's film 'Gandhi' for school children at 563 movie theatres, and conducted freedom runs.

Meanwhile, Vajrotsava Committee Chairman Keshava Rao appealed to the people to make grand success of the valedictory function of the Vajrotsavalu organised at the LB Stadium on August 22. CM KCR will deliver the keynote address in the function, he said.